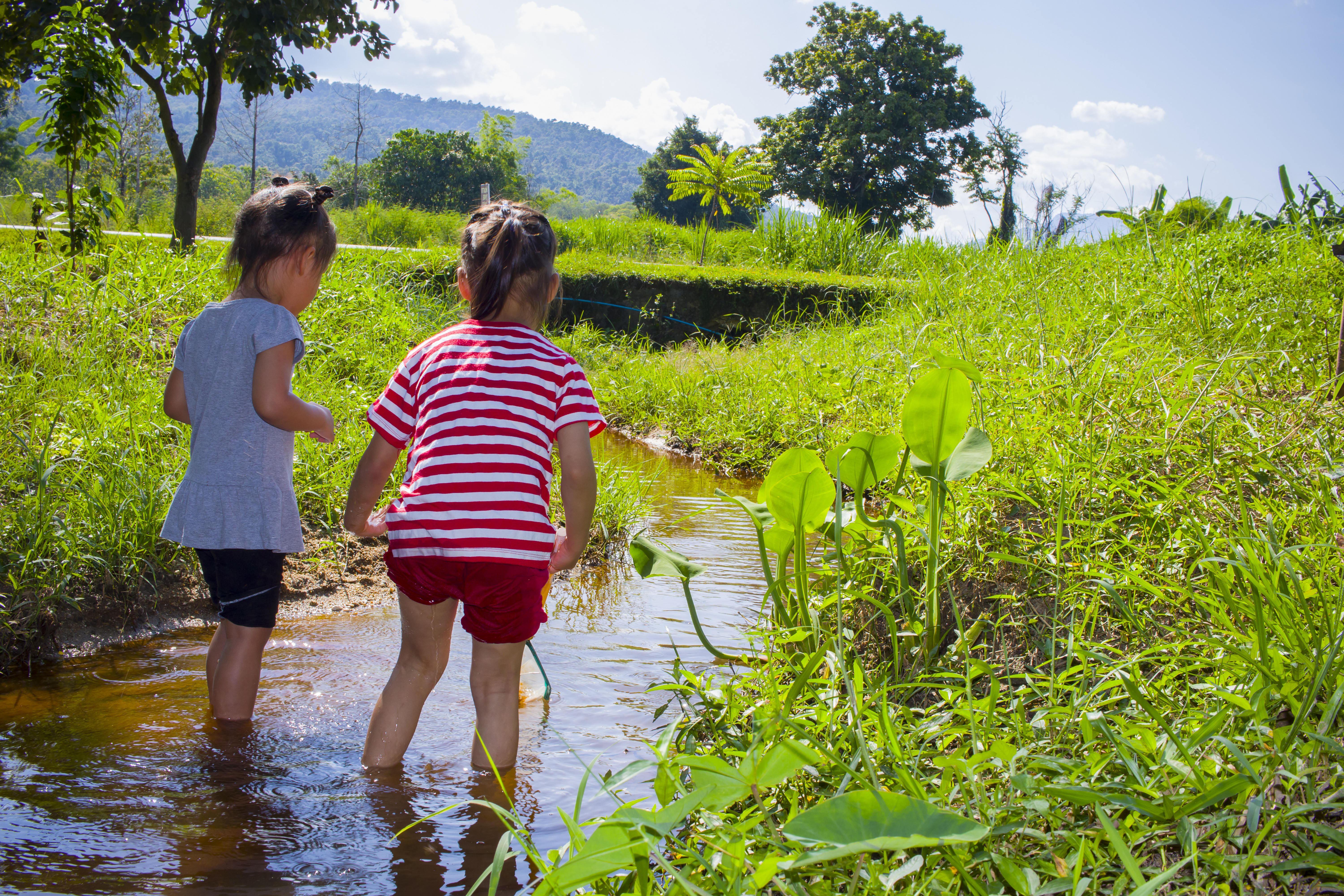 Exploring the flowing waters in Blue Ridge can be such fun! There are many types of wildlife that are easily discovered, while some creatures remain hiding in their secret spots where only they know. The two main waterways where our water-bound friends live are Lake Blue Ridge and the Toccoa River. These bodies of water are known for their stunning location, scenery, and marine life. Other bodies of water include local streams and ponds. The Blue Ridge Mountains are an ideal habitat for a variety of animals. The rocky terrain, cool streams, and climate all provide support for the aquatic animals’ lives.

Bog turtles are the smallest turtle species in North America at about 11.5 inches in length. These turtles tend to hang out on the banks of streams and soak up sunlight. They are most active between late March to early October. Bog turtles tend to favor wet areas and thick, dense vegetation to live in. Their black/brown shell can easily camouflage them on pieces of wood. Certain bog turtles will have a yellow/orange stripe or patches throughout their shell. Bog turtles are one of the most rare turtles found in the United States and are currently critically endangered.

Don’t be scared, these slithering non-venomous fellas can’t harm you! These snakes may make you squirm, but it’s not you that they’re after. Georgia has almost 50 species of snakes, and only six are venomous. The venomous and notorious Copperhead snake is commonly mistaken as a Northern Water Snake. But these two differ by the shape of their heads, swimming path, and pattern of their eyes. Rivers, lakes, swamps, and ponds are where Northern Water snakes like to camp out at. They tend to be dark-colored snakes, with tan, black or brown scales. If they are young or wet, their scales will display a vivid pigment. Their diets consist primarily of amphibians and fish.

Also, known as ‘brookies’, Brook Trout are a beautiful speckled fish that is found throughout North America. Since they are often found in clean, cool mountain waters, the Blue Ridge Mountains are a perfect spot for some to call home. Mostly active during dusk and dawn, Brook Trout are likely found in deeper waters during the day. Aquatic insects are their favorite choice of food. They also will eat smaller fish, ants, and beetles when available.

While they may look like Brook Trout, they are a different species! Brown Trout often have a brassy appearance, and display olive-brown to black spots along their sides. Due to their large size, they are a dominant predatory fish amidst their environment. They become a threat to smaller, native fish that also live in the mountain waters. If the Brown Trout population is smaller than 12 inches, they will feast on aquatic insects. But if they become larger than 12 inches, they will snack on crayfish and smaller fish.

For good reason, Blue Ridge is referred to as the Trout Capital of Georgia. Rainbow Trout were given their name due to their colorful appearance. The color of these fish can depend on their age and habitat. They prefer the chilly and clear waters that are found in these Blue Ridge Mountains. Rainbow trout are surprisingly a member of the salmon family. Does their pink stripe give it away? They survive off insects and smaller fish.

Smallmouth Bass are found primarily in the rocky and deeper areas of Lake Blue Ridge. These fish prefer waters that are fast-flowing and enjoy pools with gravel bottoms. The reason that Smallmouth Bass do well in Lake Blue Ridge is because of the cool water temperature. Crayfish can be a staple in their diet, but when small fish are present, they also feed on those. Smallmouth Bass are a part of the sunfish family. and are known to leap through the water!

Walleyes tend to stick together in small groups when cruising through the North Georgia waters. They are known to chase each other and swim in circles when in their small groups. Walleyes are native to lakes and streams. They have large, glassy eyes (hence the name) that help them catch their prey. But the downfall is that their eyes appear under lights during nighttime, which makes them easily catchable.

Mudbugs, crayfish, crawdads, or crawfish… call ‘em what you want! Depending on where you live, you may even call these speedy crustaceans a different name. They require clean water to live, so they are commonly found in ponds, lakes, rivers, and streams in North Georgia. They are active most of the year until the water drops in the winter.  Crayfish adapt their bodies to their surrounding environments and blend in with the waters around them. They peruse along the floor of the creek or lake bed and will bury themselves under rocks. Crayfish are scavengers and will hunt for fish, eggs, and aquatic vegetation to feed on.

The Green Salamander is speedy and often slimy, and not to be mistaken for a lizard. While they can be spotted on land and water, they must have a water source nearby to keep their skin moist. Salamanders also have their offspring which hatch from eggs and remain in the water. Crevices in rocks and bark from fallen trees are where salamanders can be found when not re-moisturizing.