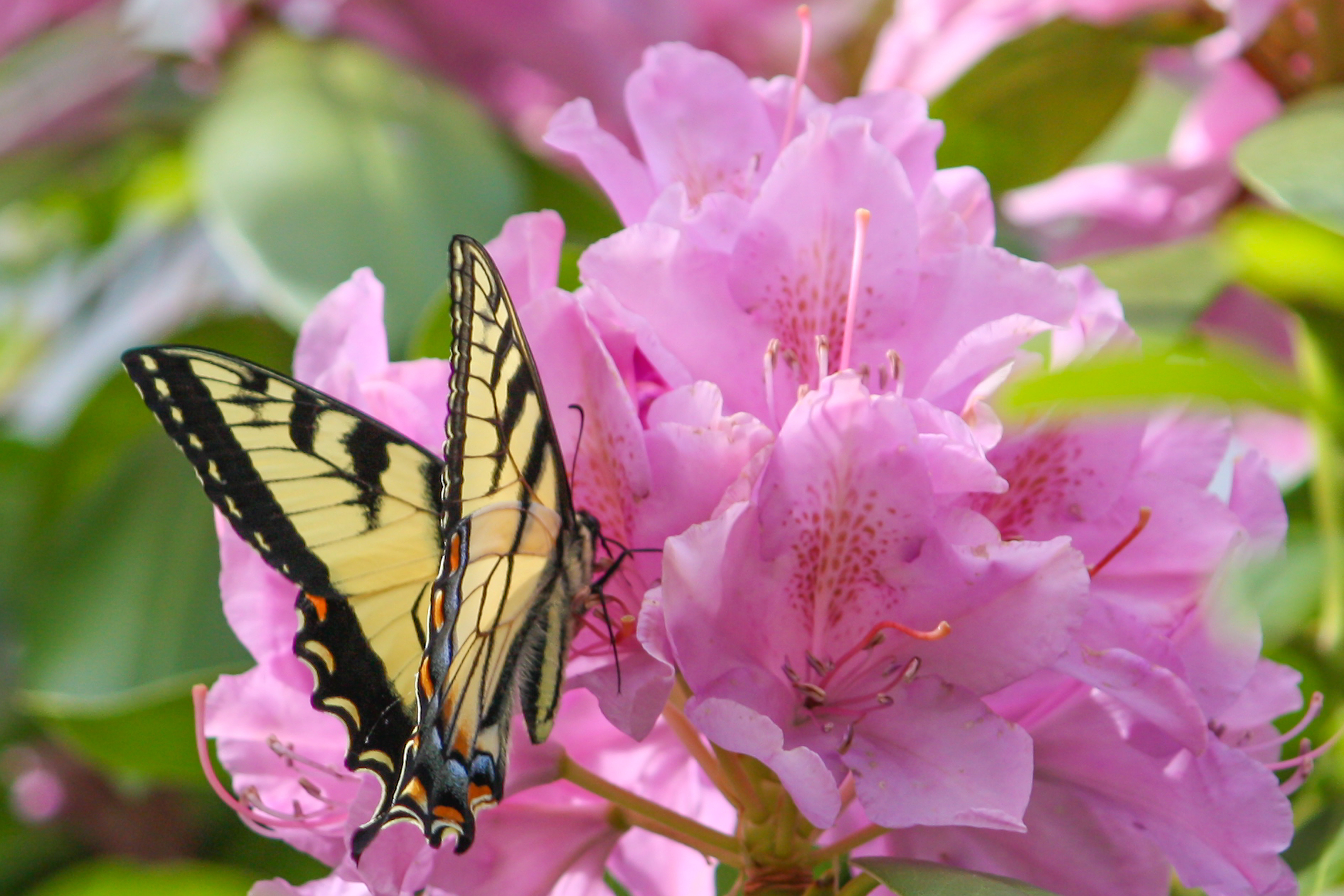 The Blue Ridge mountains are an ideal habitat for both vegetation and animal life due to several factors including rainfall, climate, and soil types. In just Blue Ridge alone, 40% of our county’s land is located in and protected by the Chattahoochee National Forest which creates a safe environment for abundant flora and fauna to thrive.

Our mountain ranges are covered in over 140 species of trees and is notably one of the most extensive broad-leaved deciduous forests still flourishing in the world. The combination of southern plant growth known as the Appalachian Forests put on quite the dramatic show throughout the year making fall one of the most popular times to visit and experience all the changing colors of fall. Let’s take a look at some of the more popular plants and animals that inhabit this special region.

The evergreen Mountain Laurel is a staple plant in the hills of the Appalachian Mountains. Tolerant to shade, these North American shrubs produce gorgeous flowers in the late spring and early summer. The spectacular blooms range in color from white to pink to deep rose and have distinctive and symmetrical purple dots or streaks. Mountain Laurel is slow growing, but average 6-15 feet in height. You will often see mountain furniture and home accents made out of the bark of the Mountain Laurel. Of Note: These plants are poisonous if ingested.

The evergreen Rhododendron come in many shapes and sizes, but they are most known for their spectacular blossoms that appear in the early spring to mid-summer in a variety of colors. The blossoms can be pure white, soft pink, yellow, red, purple and blue! Of Note: These plants are poisonous if ingested.

Azaleas were designated, in Georgia, as the official state wildflower in 1979. A relative to the Rhododendron, and in fact a part of the Rhododendron genus, but as all azaleas are rhododendrons, not all rhododendrons are azaleas. Similarly, azaleas bloom in brilliant colors like scarlet, crimson, orange and more. The main difference between the rhodies and the azaleas is the leaf size, quantity of stamen, and azaleas are deciduous as opposed to its evergreen cousins. Of Note: These plants are poisonous if ingested.

Close by in Hiawassee, there are rhododendron gardens filled with azaleas, mountain laurels, and many other native Georgia plants. Plan to visit The Hamilton Gardens at Lake Chatuge and learn more about area flora. Admission is a suggested $5 donation.

The official state flower of Georgia is also found thriving in the Blue Ridge Mountains. The Cherokee Rose is both beautiful and interesting. Rooted in Cherokee legend, the Cherokee Rose is said to have been created from the tears of Native American mothers crying for their children journeying on the Trail of Tears. The fragrant rose is white for their tears, a gold center represents the gold taken from Cherokee lands, and 7 leaves for the 7 Cherokee clans. The evergreen Cherokee Rose plant is a climbing shrub that has antibacterial properties.

Probably the most common and most exciting animal to see grazing in the woods. These beautiful animals are the smallest of the North American deer population and graze on leaves, corn, fruits, and acorns. Male deer are called bucks and are easily recognizable by their antlers which grow each year and fall off in the winter! The female deer are called does and they give birth to 1-3 fawns a year. The best time to spot deer are at dawn and at dusk since deer are primarily nocturnal animals.

You might see wild turkeys on the side of the road on your drive up to the mountains or out in a field foraging with their flock. Turkey are a large game bird with a long neck and long legs. Male turkeys are distinguished by their unfeathered heads and large red throat known as a “gobble”. Turkeys can fly short distances and often roost in trees or under shrubs.

The Black Bear is the smallest of the North American bears. These bears are ominivores which means they eat both plants and meat. Bears are also nocturnal which means they sleep during the day and come out to hunt at night. While we are intrigued by them, it is best for black bears to meander through the woods without human interaction.

Bird is the Word

Birding is a popular pastime for nature lovers and there are more than 80 species of migratory birds and 200 species of  native x to spot in the mountains! The Georgia State bird, the Brown Thrasher, can be seen here along with the Ruffed Grouse, Owls, Ravens, Wrens, Woodpeckers, Rose-breasted Grosbeaks and many varieties of Warblers and Hawks including Bald Eagles.

Resembling a small dog, coyotes are indeed canines, but they are not of domesticated variety. They have keen eyesight, an acute sense of smell, and the ability to quickly adapt to a variety of habitats. In the evenings you may hear distant high pitched cries, shrieks, barking or howling as these animals communicate with each other. Contrary to popular believe, coyotes do not hunt in packs, but are primarily solo hunters and are effective in maintaining a balance in Georgia’s rodent population.