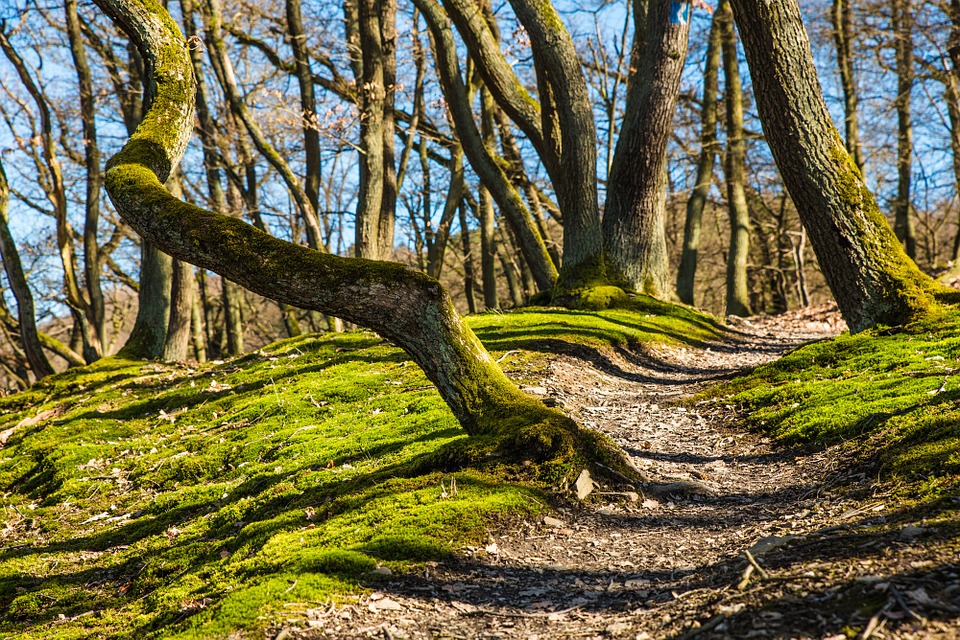 For most American kids, our first introduction to the concept of trail markers is Hansel and Gretel’s attempt at leaving crumbs on their venture into the woods. The birds thwarted their efforts and that’s where their fictional journey begins. First published in 1812, their story was read to children in Germany at the same time the Cherokee Indians were creating their own trail markers here in the North Georgia Mountains. Or are Trail trees just folklore?

Trail trees, trail marker trees, crooked trees, prayer trees, thong trees, or culturally modified trees are hardwood trees throughout North America. One unique characteristic of the trail marker tree is a horizontal bend several feet off the ground, which makes it visible at greater distances, even in snow. These distinctive characteristics convey that the tree was shaped by human activity rather than deformed by nature or disease. The legend is that Native Americans intentionally shaped these trees for navigational purposes or to mark important places, such as sacred burial grounds.

Throughout the North Georgia Mountains, a day of hiking can find you encountering one or more of these gentle bent giants in our forests. As you hike through one of the twenty four top forests in our area you’ll stumble upon some of the most incredible shaped trees and wonder if they are the work of Mother Nature or did an American Indians walk these same trails 200 years ago. It is both highly possible and very likely that the tree was there marking a specific direction or possibly an area where a plant grew at its base that was used for healing.

For many, a hike in the woods is an adventure you remember from your childhood days. It is a child’s foray into uncharted territory, a field or a wooded area close to home where they might discover an old unidentifiable bone, a creek filled with crayfish, or a cluster of butterflies on a floral bush they’ve never seen the likes of before. They come back from these walking expeditions with pockets filled with pretty leaves, unusual shaped stones and always a bird feather or two. As adults we reawaken that lust for exploration and here on these mountain trails, there seems to be one treasure that many are hunting: Fairy Crosses.

The Legend of the Fairy Cross derives from the Cherokee Indians and thought to be over 2000 years old! It is said that long, long, ago fairies inhabited a certain quiet and remote region in the foothills of the Blue Ridge Mountains. The fairies roamed freely, enjoying the beauty and serenity of that enchanted place. One day, the fairies were playing in a sunny dell when an elfin courier arrived from a far-away city bearing the sad news of Christ’s death. When they heard the terrible details of the crucifixion, the fairies wept. As their tears fell to the earth, they crystallized into little stone crosses. Though the fairies have long since disappeared, the little stone crosses, known as “fairy stones,” still remain as vestiges in that enchanted spot. There was a belief among the Cherokee that the crosses had the power to reduce the owner invisible at will. In some instances, the tiny crosses were supposed to give the owner the power of diving into the ground and coming up again among the enemy to scalp and kill with unexpected terror.

Fairy crosses (aka fairy stones) are small bricks originally formed seven miles underground of the Blue Ridge Mountains. Staurolite crystals form into little tiny “bricks” that, under pressure, twist in 60 degree or 90 degree angles, forming crosses. As they push their way up to the earth’s surface, the action of wind and rain dissolve the softer surrounding stone called schist to reveal the precious cross-shaped minerals within.

The good fortune of finding fairy stones is best after a heavy rain. Dig with your hands along the soft dirt at the base of the trees. The cross stones are the same color as the dirt, so use your hands to sift the stones from the soil until you find a cross shaped stone about the size of a small marble, usually less than an inch in length. They are wonderful keepsakes when found, and can be polished and used as a lucky pocket token, or designed into a necklace, bracelet, or earrings.

If you haven’t had the good fortune to find a fairy stone on your hiking trip, you can still find a wonderful collection of fairy crosses at Pezrok in downtown Blue Ridge, a gallery full of artistic creations of exquisite minerals, fossils, gems and carved driftwood.

There are countless numbers of adventures to be had on your visit to these mountains. You’ll want to capture many of your explorations in pictures to take home and share with us, your family, and your friends. Oh, and while you are taking a cell phone selfie at one of the bent trees you are likely to encounter, remember your phone is also equipped with GPS, which will assure your chances of getting back to your car in the parking lot. As we already know from 19th century literature, leaving a trail of breadcrumbs will not suffice.