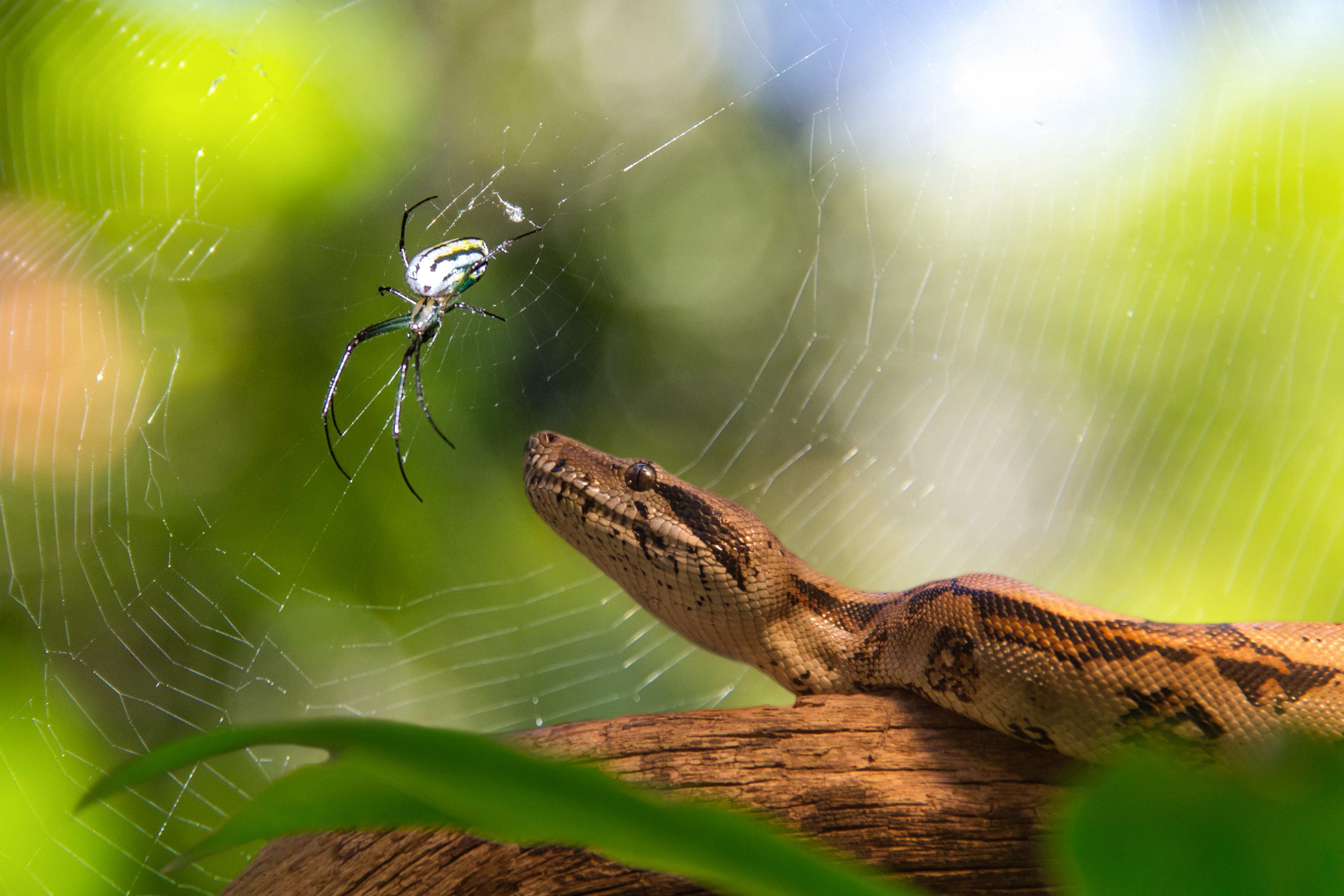 Halloween is quickly approaching and to get us in the spooky spirit we’ve comprised a list of 7 creepy crawlers located here in Blue Ridge. While many of these creepy crawlers are local to Blue Ridge and might look extremely scary; in most cases, they will not hurt you, as long as they do not feel threatened. So if you run into one of these creatures while you’re out exploring, make sure to leave them be and you’ll stay safe. After all this planet is their home too! How many have you seen? Share your creepy crawler photos with us by tagging @escapetobr on your social posts.

While the Copperhead Snake is one of the most common snakes found in North America, they are also venomous. They get their name because of their copper-colored heads but are also commonly referred to as Water Moccasins. They’re a medium-sized snake, averaging anywhere between 2-3 feet long. They have hourglass-shaped markings on their skin which sets them apart from their commonly confused partner, the Corn Snake, who is not venomous.

The Copperhead can be seen outside in the day during the fall and spring, but in the summertime they are nocturnal. They do; however, like to be out on humid nights after rainfall. Copperheads are masters of camouflage because their brown coloring helps them to blend in with wooded areas. If you look at the picture above we’ve circled the snake so that you can find him. The camouflage helps them to ambush their prey. They mostly use the “sit and wait” method for their hunting, where they bite their prey and then wait for the venom to kill it. And much like other snakes, they eat their food whole. It’s hard to believe, but they only eat 10 to 12 meals a year. Copperheads bite more people every year than any other U.S. snake species. And while they are venomous, their bite is rarely fatal, for their venom is not very potent.

Chances are you’ve probably run into this strange insect before. The Praying Mantis is so named this because the way they stand makes them look as if they are praying. They camouflage in with their surroundings, turning a green or brown color to blend in with the plants around them. They then snatch their prey in the blink of an eye with their spiked long legs.

The mantis can also turn their heads 180 degrees to scan their surroundings, making them even more of a formidable predator. The females are even more vicious, sometimes even eating their mate after mating. While they may seem like they’d be aggressive towards humans, as far as we know they cannot hurt you. They have no venom and cannot sting. Still, I know I’m certainly not brave enough to hold one in my hand, like Deanna here.

When you think of rattlesnakes you probably think they’re only located in hot, desert climates. But on the east coast, we do have the Timber Rattlesnake, which is a venomous pit viper typically found in eastern North America. It is, in fact, the only rattlesnake species in most of the northeastern United States.

Adult Timber Rattlesnakes can be anywhere between 30 inches to 6 feet long! They can be found in a variety of different habitats from pine forests, to the mountains, swamps, rivers, and farmlands. They do, however, typically stay away from more urban areas. They hibernate during cold weather, so they are only active from late spring to late fall. When they are out and about, they typically stay in the coiled position, ready to ambush their prey. They use their venom to immobilize their prey. Don’t worry too much though, while their venom can be fatal to humans, the Timber Rattlesnakes will not attack unless they feel threatened and they primarily feed on small mammals anyways; so we’re in the clear! Still, if I ran into one of these on a hike I’d turn the other direction!

These funny looking caterpillars will one day turn into the beautiful Tiger Swallowtail Butterfly which you’ve likely seen in nature. But before these little guys can turn into beautiful butterflies they have to go through their life cycle, which takes about 2 months. The Tiger Swallowtail Butterfly will lay its eggs on a large variety of different plants. In about a week, the eggs hatch baby caterpillars. Even right after they’ve hatched you can see their “false eyes” start to come in. These fake eyes are to fool predators into thinking that they’re a snake and then they will hopefully be left alone. They stay in the caterpillar stage for about 3-4 weeks. They are typically green for most of their caterpillar life until they are just about to turn into a chrysalis, then they turn brown. While in the chrysalis stage they almost look like little sticks and they stay this way for 1-3 weeks. Finally, they emerge from their chrysalis as beautiful Tiger Swallowtail Butterflies! The strange-looking caterpillars have an ugly duckling story. They were once odd-looking creatures who transformed into something beautiful!

I’ll be honest, just looking at pictures of this spider freaks me out! I keep screaming every time a picture of them comes up, so they definitely fit under the creepy crawlers category! The Trapdoor Spider is a medium-sized spider that builds underground burrows made of different materials including silk, soil, and vegetation. When in their burrows they are extremely hard to see because the plant and soil materials help to camouflage it. They are nocturnal, so at night the spider waits for their prey while holding on to the trapdoor with their claws. Their prey is captured when they disturb the ‘trip’ lines, alerting the spider. The spider then uses vibrations to find their prey and when it is close enough, the spider leaps out and ambushes it. The Trapdoor Spider mainly eats insects but can also eat arthropods and small vertebrates. In the U.S. the Trapdoor Spiders venom is not very strong and almost feels like a bee sting, but they are still terrifying to look at. In Georgia alone, there are 8 different species of these spiders.

Most of us have probably never run into these creatures walking around Blue Ridge. The Hellbender Salamander is an incredibly rare, giant salamander that lives in parts of Northern Georgia. Believe it or not, the Blue Ridge Mountains have the largest diversity of salamanders anywhere in the world. Since salamanders are amphibians they hibernate until heavy rainfall occurs, so they’re already a rare sight.

The Hellbender Salamanders spend their time hiding under rocks in cold streams. They can grow up to 2 feet long and live to be as old as 20 or 30! They have wide mouths that make it look like they’re almost smiling. But don’t be fooled, they are not cute and cuddly; they’re slimy and very strange looking. They’re prehistoric creatures, dating back to 65 million years ago; long before humans roamed the earth. But today they’re starting to go extinct because the streams they live in are becoming polluted. Hikers also sometimes hurt the Hellbenders when they find them. Even though they may look creepy, make sure you leave the peaceful giants alone if you see them in the wild.

These spiders are VERY common to North America so I’m sure you’ve had encounters with them before. While they may be small, they have unusually potent venom. While their bites rarely kill humans if you are bit you should seek medical attention right away because it can make you extremely sick. However, female Black Widows are the only bites that can be harmful to humans because of their large venom glands.

The females are the ones who are typically a dark, shiny color and have a red hourglass on their abdomen. Much like the Praying Mantis, female Black Widows also often eat their mates giving them the name “widow spiders”. To catch their prey the Black Widows create their silky, strong web and then nest on the ground in dark areas. When its prey is caught, the spider rushes over and wraps it in silk. There’s a reason there are so many references to Black Widows in pop culture today because these are creatures you don’t want to mess with!

For more family fun and educational opportunities in Blue Ridge, we put together a fun educational activity booklet for you and your kids to enjoy that you can download here. Visit our Educational Things To Do in Blue Ridge page for historical more educational fun in history, biology, natural science, geology, Native American culture, physical science, and hands on activities.